Home Archives Profile Subscribe Professional Guidelines The GOOD, The BAD, The UGLY My Website
Previous month:
May 2017
Next month:
August 2017

Documentation of the TRUTH

Images have always been the indispensable mode of communication for artists and makers.   With the Internet, the power of the image travels much further.  Photographic images especially share one person's perspective of reality with the world. In recent years, more than ever, images convey an experience and inform an audience through social media such as Twitter, Instagram, and Facebook.  The value of documentation with images sometimes supersedes the ephemeral event.  For makers, having images ready to transmit whenever needed, can be a key to success.

During the months that I worked on TRUTH and the related bracelets, I took documentary photos. The studio shots brought great visibility to this work through CNN and KQED (local PBS station.) Even though those photos weren't professional quality it permitted me to participate in the political commentary of the moment.  Despite the ease and convenience of taking photos with the amazingly versatile smart phone cameras, you want your final documentation photos to be professional quality. It would have been much less expensive to simply accept the in situ, in studio shots, but I know that professional quality photography needs a professional photographer with professional equipment and professional skills. For me, that is Philip Cohen, for more than 28-years and counting. 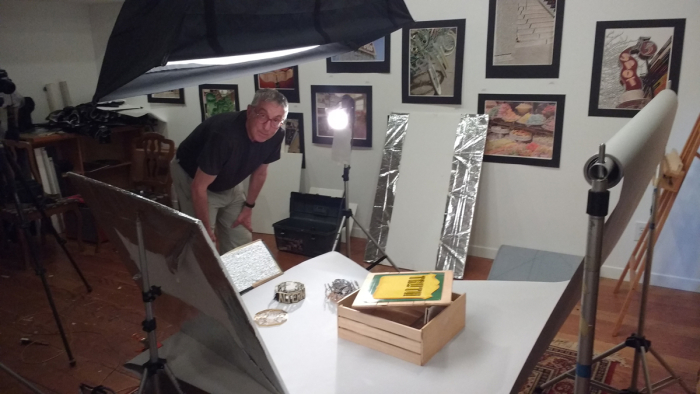 When I arrived to pick up my artwork at Phil's, I took some photos of his photo set up.  I find the behind-the-scenes set up insightful. What is outside the camera frame is rarely shown and it reveals the tricks that a top notch photographer keeps handy. 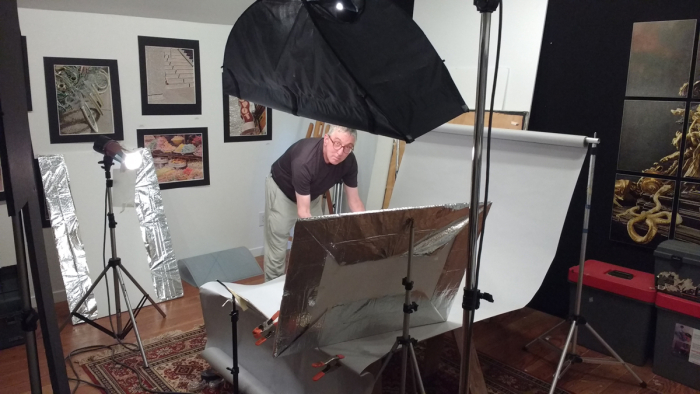 Of course, the lights and the camera are on a tripod.  That is step one for a good shot...and we rarely do that with our phones. That reminds me that a stand for my phone might improve my quick shots.  Note that the lights shine up into the umbrella for a bright diffuse light.  Buying those umbrellas doesn't cost that much, and they can be really handy for reflecting light. 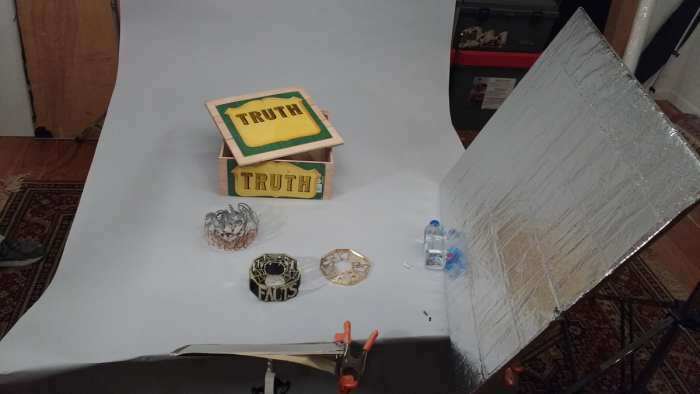 Notice the large cardboard covered with aluminum foil. This reflects the light in a bright diffuse way, and by tilting it up or down it can reflect more light exactly where you want it. This works even if you don't have photo lights.  In the photo below, you can see this same cardboard from another angle. 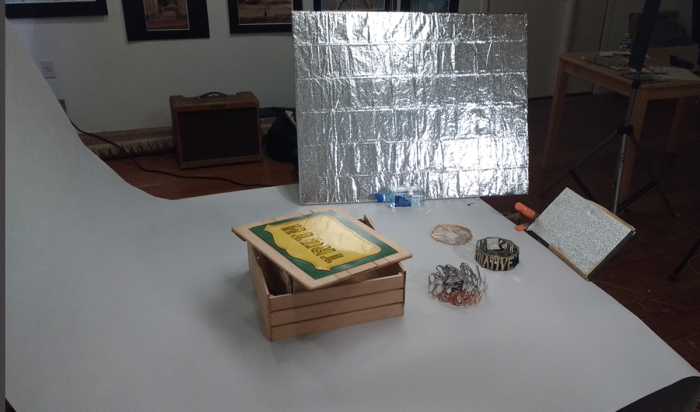 Note also the small cardboard with aluminum foil in the front of the set-up. If you look in the other photos you will see it is propped up on an easel right outside of the frame of the finished photo. 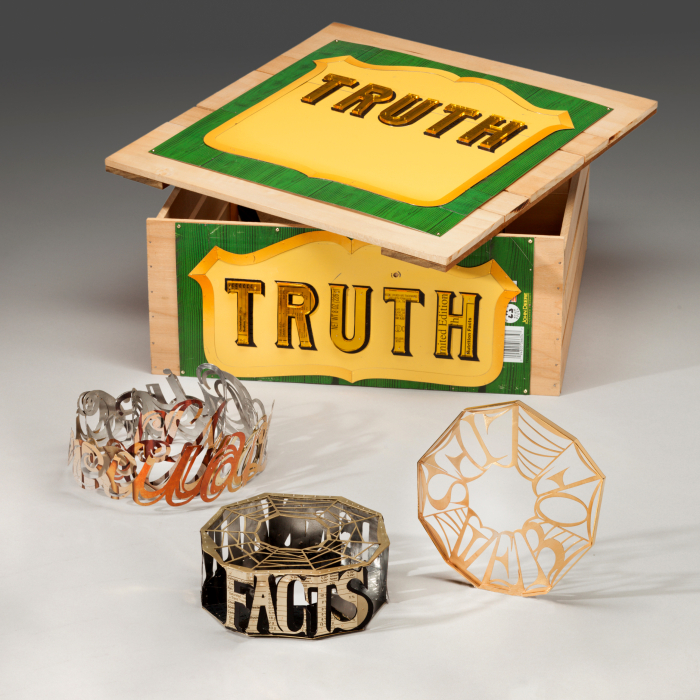 In my next post,  I will compare my quick cell phone photographs to those by a professional for your review & opinion.

Fabricating TRUTH with a Web of Lies

Fabricating TRUTH - Speaking our own mettle

Fabricating TRUTH with a Web of Lies

Ever since the January presidential inauguration, I have been repeatedly dazed by both shock and dismay.  In addition to stepping up my political activism significantly, I have been channeling my fears and frustrations into "Fabricating TRUTH" along with three new bracelets. Today's post shows the final steps for one of the bracelets, "Web of Lies". 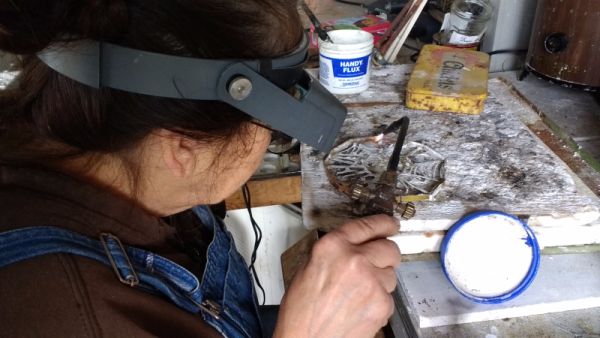 Confidentially, I must confess that the final steps of finishing any artwork fill me with anxiety -- so much concern that I sometimes even delay finishing. Does that happen to you?

Will the final results be equal to my original imagination?  I always find the end of a project scary. I am worried that the last steps will ruin weeks to months of work.

For these bracelets, I never made any drawings or models.  I've never made anything similar. In the beginning, it was more of a concept with little idea about how I'd even construct each bracelet. It was all in my head, nothing more than a mental image. 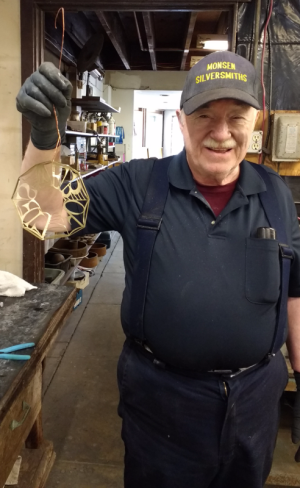 Despite my concerns, I pushed forward.

Because I imagined that the "Web of Lies" bracelet should be gold plated, I had to find a plating shop which is becoming increasingly difficult to find. But instead of a problem, this adventure led to a surprising highlight.  A fellow silversmith, Gary Reopelle, who owns Monsen Plating in Berkeley, CA, agreed to plate my "Web of Lies" bracelet.

Gary is a rare breed.  At 76 years young and tough, there aren't many silversmiths and plating shops anymore. A rare breed in another respect because there surely aren't' many Republicans in Berkeley either -- but we were highly aligned with our hand skills, silver repair work. 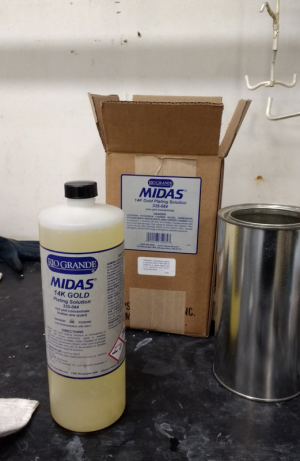 The gold plating solution is cyanide-based and has to be shipped with a hazardous materials surcharge, so this would cost close to $200.  But it was really important to the concept of this bracelet to have it gold plated. 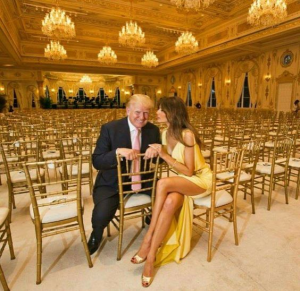 The gold plating on the Web of Lies Bracelet was an important symbolic component for the bracelet because Trump properties and branding ostentatiously uses the appearance of gold, (even if it is plastic or paint) as a symbolic motif. The superficial gold is a pretense of value, so thin it is essentially fake.

If you aren't familiar with the Trump brand, this photo (left) is a stellar example of the prevailing decorative motif. 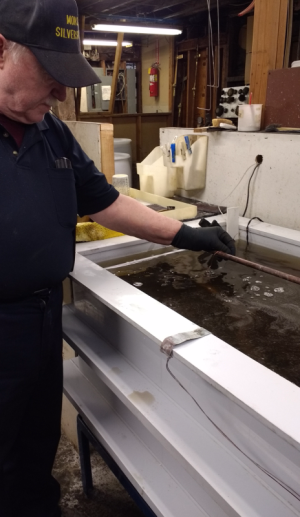 Electro-cleaning is always the first step for all plating. Removing the buffing compound, fingerprints, and every speck of dust is essential for good plating. This was followed by a rinse with a hose. All the waste water (even from the cleaning tank) is considered hazardous waste and has to be disposed of in compliance with environmental protection standards. It costs over $600 to dispose of one tank of "rinse water." No wonder plating in so expensive. 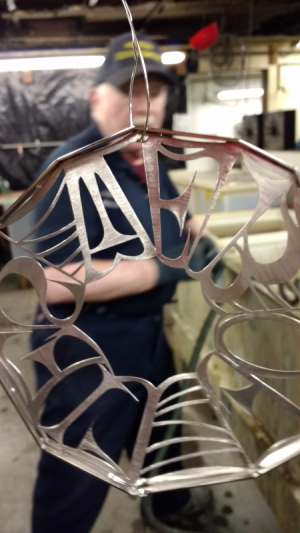 The photo (left) shows the Web of Lies bracelet with a nickel plate. It looked fabulous already. Nickel plating has a hard smooth bright finish.  There was an intermediate step of a copper plating (before this) for great adhesion of the plating. Each of the plating steps took only minutes as the shape of the bracelet was easy to handle.  Nickel plate is necessary so the gold plating does not alloy with the brass construction or copper plating underneath. 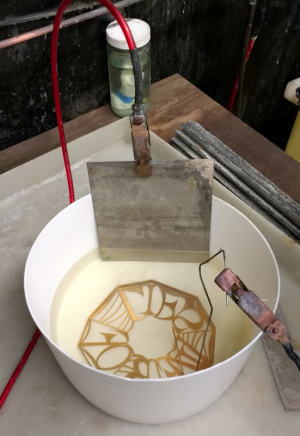 The photo (left) shows the gold plating solution. The gold molecules in solution will plate on the bracelet.  This is as much skill as intuition. Gary kept adjusting the volts and amps to get it to plate just right (shown below). So exciting! 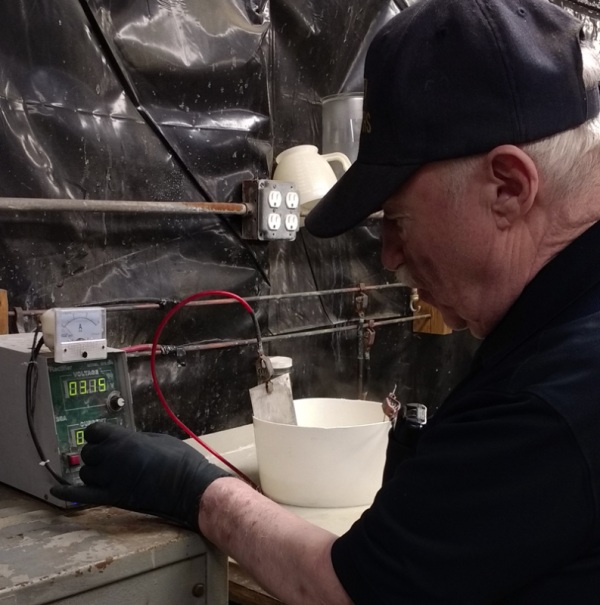 In the photo below you can see Web of Lies gold plated. 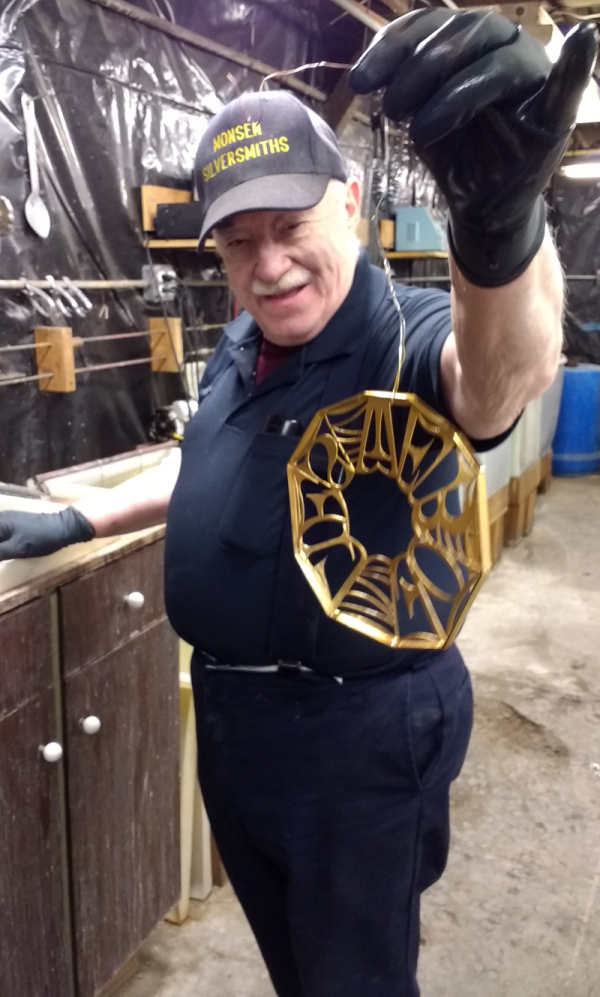 I want to extend my sincere gratitude to Gary Ropelle, owner and master at Monsen Plating for his skill and generosity. He and I are in the same increasingly rarefied silver repair business. He has a lifetime collection of hammers (left) and forming tools (right) that made me jealous.  A lifetime of accumulation for working with metal. 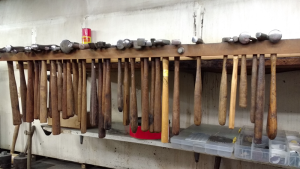 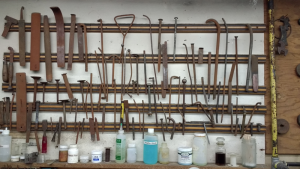 Monsen Plating also had another feature that I greatly admire .... space for tools and equipment. 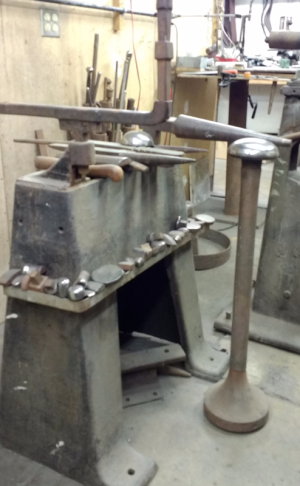 In contrast, my studio space is squeezed into a two car garage.  Whether doing silver repair or artwork, I often dream of having a gigantic studio in my next lifetime. In the meantime, I am working as fast as I can.

Stay tuned for my next post with behind-the-scenes photos of Philip Cohen's professional photography of TRUTH and the three bracelets.

Posted at 04:00 AM in Information about Harriete Estel Berman | Permalink | Comments (1)