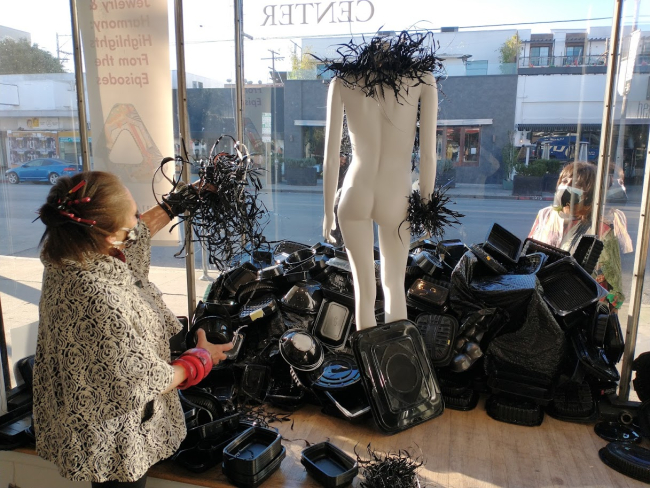 Recently, I drove to Los Angeles for the opportunity to be featured on a Los Angeles morning TV news broadcast called "Gail on the Go."

I learned a lot. And here are some of the insights that are worth sharing!

For this television experience, I had four goals: 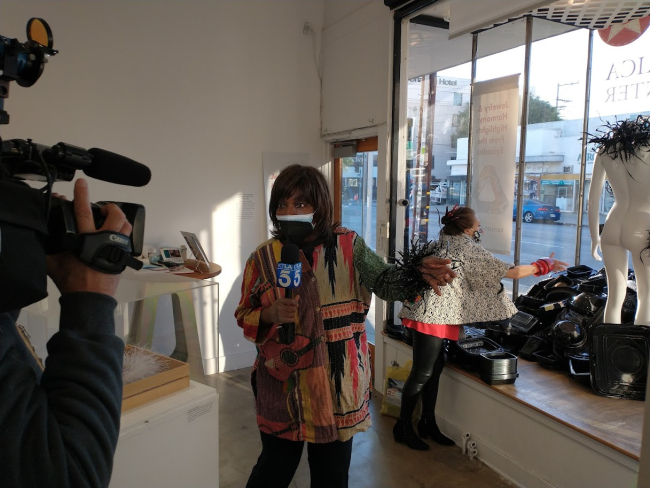 GOAL ONE: LA viewership potentially reaches 14 million people, but the demographics are not pre-selected for art or craft.  However, it was an opportunity to introduce the Craft In America exhibition space in LA and the Craft in America JEWELRY online video to millions.

GOAL TWO:  It was also a chance for me to "practice" being on television. Like most skills, no one starts as an instant expert. One must practice their craft -- but in a completely different way than the metalsmithing craft experience.  This would be a "live" opportunity to practice.

GOAL THREE: Learn more about the production of television & videos.  I was told to be at the gallery between 5:30 a.m. and 7:30 a.m.  Can you imagine? Television starts early. We got there at 6:20 a.m.   Gail (the on-camera host/reporter) and Bob (the producer/cameraman) talked to me about my work, my history, their television plan, and expectations.  Actually, it was a very relaxed environment.  Really!  Over the next 4 hours, we did multiple short interviews and several live 30-second segments, called "teasers," during the morning news.   In each of the 30-second "teasers", they try to set up some intriguing images or topics about the exhibition at the Craft in America gallery. GOAL FOUR: Be prepared with ideas and be ready to adapt. With several "mental visions" for this opportunity, I brought more recycled black plastic from home to place into the window display.  Once I saw what they could do, I suggested that a teaser could show me actively placing more plastic in the window as an action shot. "Yes", "yes", they liked the idea.

Then it was getting close to the time to get ready for the interview. Thinking fast....I suggested that "Gail on the Go" might like to wear one of my Recycled Black Plastic bracelets during the interview. "Yes", "yes",  Gail and Bob loved the idea. I have to say, the bracelet looked great with what she was wearing. 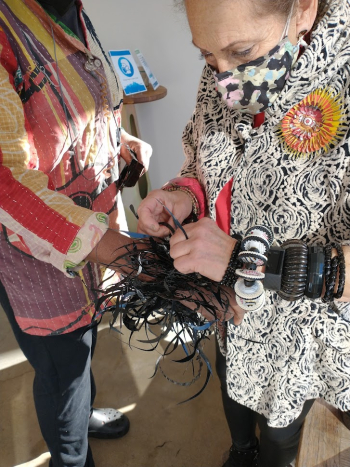 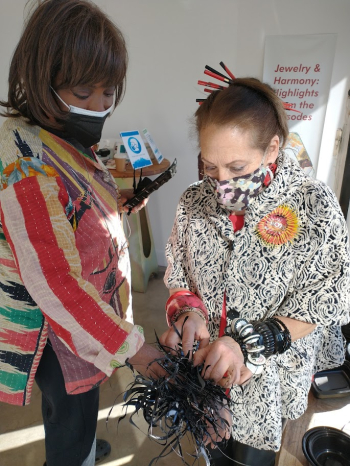 Fortunately, I had extra bracelets in the car.... so Bill, my husband and personal assistant for the morning, went to get another bracelet.

He also got my mobile studio -- actually a cardboard box filled with black plastic for cutting while riding for hours in the car. 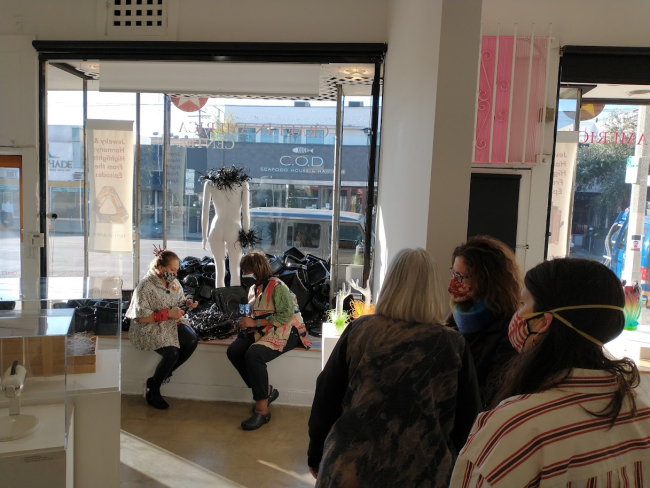 "Gail on the Go" and the artist, Harriete Estel Berman, sat together in the window of the gallery and talked about a variety of details that Gail and the producer might want to cover when the camera went "live."  Otherwise, there was no preparation for the questions that Gail might ask me.  Behind the camera, staff members of Craft in America (Carol Sauvion, Emily Zaiden,  and Joan Mace) watched.

While Gail and I talked between "live" segments, I casually started cutting plastic.  This is what I normally do for hours....it is a slow process.  Serendipitously, this also helped them visualize my next suggestion. What if I was actively cutting plastic on camera -- another "action" shot. "Yes", "yes", they liked it. 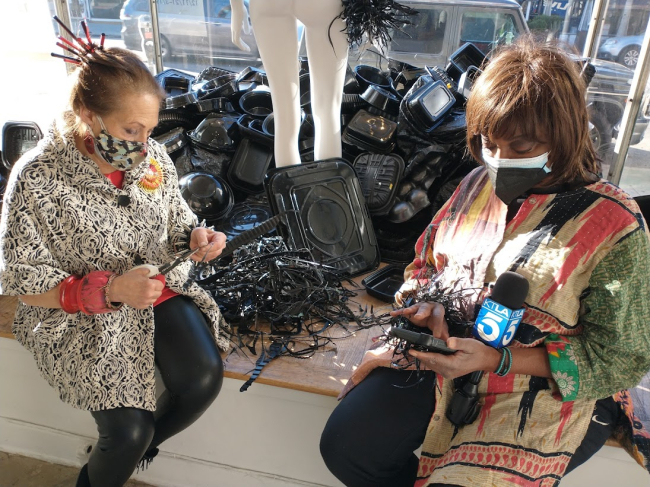 Between action shots, I also noticed Gail adeptly using her phone to communicate with the control room. She found short clips from the Jewelry video and images from my website for the television station to include in the broadcast.  Her mastery of phone interface was impressive. 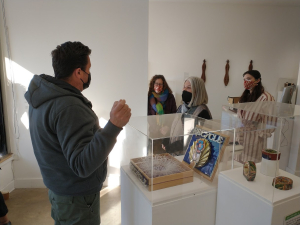 Another level of astonishment was that Bob, the producer/cameraman (shown in the photo left), used his cell phone's camera to capture "B roll" images.  "B roll" is any extra footage, images, or video clips for supporting content to use as background or details.

At one point, Bob asked, "Do you have any shots of the Recycle jewelry being modeled on a real person?"

Within a minute, I am using Gail's phone to show them images on my website. They chose some images to send to the studio for editing....where the studio editor would prepare to insert my photos into the video segments with text information, links, and resource information, all within minutes while we waited at the gallery for the next "live" teaser or interview segment.

Also while we waited, I showed Gail how to cut shapes from the plastic trays and containers.  She is curious about everything and it became obvious that she would like to try doing just about anything.  Gail was thrilled to make her own cuts in the black plastic. 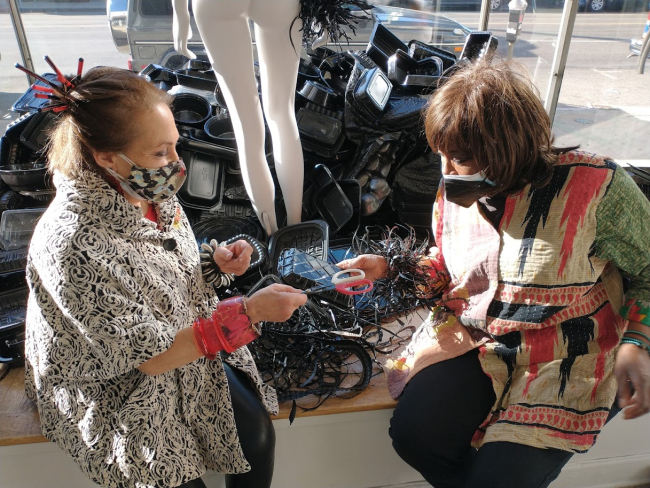 Time for the interview. The producer/cameraman did not use a tripod for my interview so he could move around for different angles and move in for closeups. I was given a last-minute tutorial for hand signals to navigate silently during the interview.  Yikes! Learn fast. 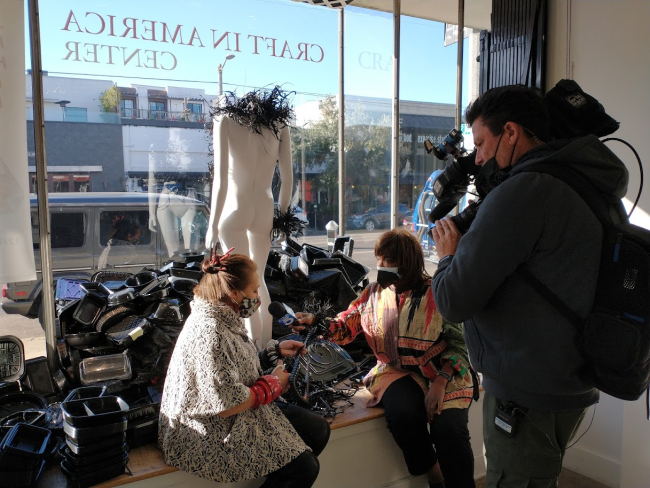 Cutting plastic trash has become second nature for me, but cutting AND talking during an interview, AND looking at Gail or looking into the camera, AND thinking of what to say articulately and intelligently, all at the same time..... That was a challenge!  I had no idea what the questions would be. I need more practice like this (i.e., well-prepared, "spontaneous" commentary), but I survived. 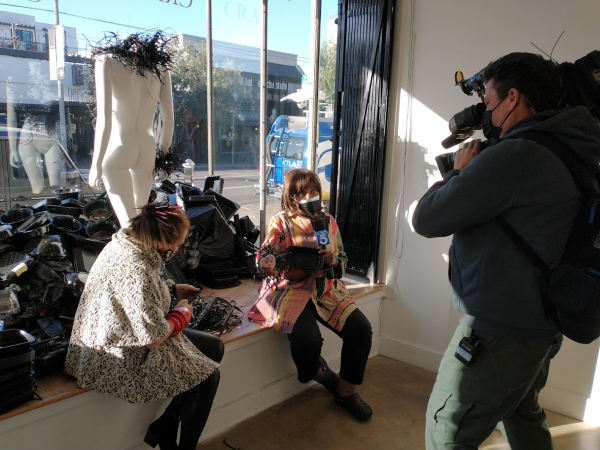 Whenever the opportunity presents itself in situations like this, I try to learn some insights from professionals in other professions.  Here is the big lesson that I learned from Gail.....and a great lesson for everyone.

"Gail on the Go" visits and talks to people all over the Los Angles area covering activities of cultural interest for an audience of millions.  While we were talking off camera, she confided, "Every artist needs a website."  I AGREE! (All caps to yell this loudly!)

Every artist and maker in every media needs a website. Social media is good, but it is not a website.  A website is your "go to" resource for opportunities just like this television shoot.  A website is your first step for putting your work out there 24 hours a day for public consumption.   Gail told me that she was often disappointed when the to-be- featured artist didn't have a website for links, extra photos, or supporting information for viewers to follow up independently.  Consequently, the opportunity is lost. A website is essential to leverage your visibility before you step out into the public view or before the craft show.  With all the digital technologies and apps, there are no excuses or barriers to entry.  Website templates are relatively easy to use. The learning curve is designed for easy interface, and if you don't feel ready for learning website construction, then you could hire a high schooler or college student for their youthful familiarity with the internet interfaces.

I use SquareSpace....but there are many other websites that provide easy-to-use templates. Pick a style and jump right in. Websites can and should be constantly updated.  So don't wait.  Let the website grow whenever you have time or new thoughts to include. You can change it at any time. Websites are not like a finished drawing. Websites are always in flux.
|

Learn from the voice of experience.  Learn from "Gail on the Go."  Where is your website?

Posted at 08:19 PM in Craft In America , Exhibiting your art and craft work. , Information about Harriete Estel Berman | Permalink | Comments (0)