Is your maker mark on your work? 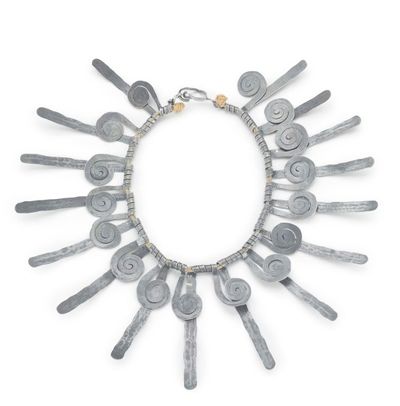 What are the issues here?

First, the person who found it at the flea market had to appreciate it's dynamic, perhaps even commanding  appearance in the context of a flea market... the "guy had it in a box on the ground,”

Next: she sees the Calder jewelry exhibition at the Philadelphia Art Museum and becomes informed, a great reason to study and learn about the decorative arts.

But the most significant issue, the one that changes a $15 necklace found at a flea market into a mind blowing value, is that it had to be authenticated by the Calder Foundation in New York. "Part of the mission of the Calder Foundation is to protect the Artist’s legacy. Many existing works are often misattributed to Alexander Calder." (Examples of Calder Jewelry can be found here.)

The foundation discovered that the necklace was indeed an authentic Calder originally exhibited at the Museum of Modern Art in 1943.

We can learn a lot from this example.
AND I have more to come in future posts.

Slide show of jewelry by Calder on The New York Times Website.

Fabulous images of Calder's stabiles and mobiles along with other work can be found on ARTSY. There is also an interview with his grand-son.

Here is a link to another maker mark example. In this segment from Antiques Roadshow,  there was a deliberate effort to fake the maker's mark.  You can watch the video segment here.